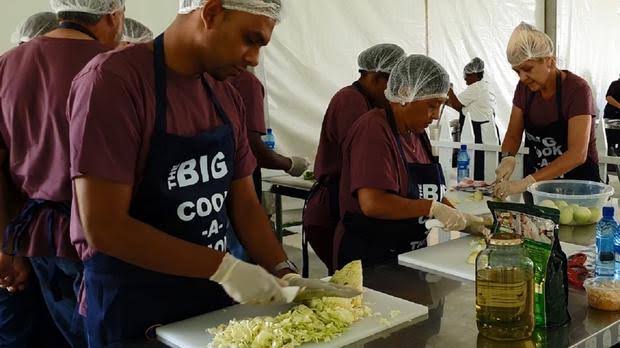 October 16 has been declared by the United Nations as World Food Day. The theme for World Food Day 2019 is “Our Actions Are Our Future. Healthy Diets for A #ZeroHunger World”. It focuses on tackling global hunger.

World Food Day seeks to shine a spotlight on the plight of  870 million undernourished people in the world. Discussions around food security and agriculture are pertinent on World Food Day as they directly affect the majority of malnourished individuals who live in the rural areas.
Meals on Wheels in partnership with the Department of Social Development did their part by preparing 10 000 meals for pupils all over Johannesburg. Volunteers descended on the Nasrec Expo Center to cook, package and deliver nutritious meals to make sure 10 0000 more children had something to eat on World Food Day.
The massive feat of getting the meals ready on time took a grueling 12 hours with volunteers work in shifts stationed at over ten work areas. Their spirits were kept up by all forms of entertainment including a marimba band and side splitting commentary by comedian Mpho “Popps” Modikwane.
Meals on Wheels CEO, Effort Bhebe lamented “When you look at the number of people who got to bed on an empty stomach you can’t help but want to get involved, feeding the nation is our core business and on World Food Day it is so important to highlight the issue of hunger and malnutrition within our communities”.
Source: IOL

Anti-Racism South Africa calls on the public to #UniteAgainstRacism

Research thoroughly before employing anyone in your home