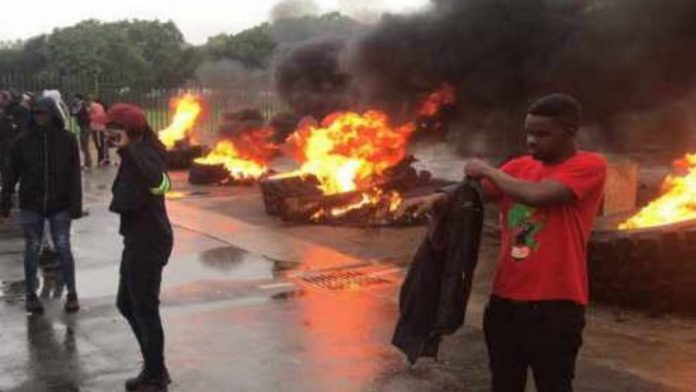 Tshwane University of Technology (TUT) management says more talks are necessary to end ongoing student protests. Students at the university’s Pretoria and Ga-Rankuwa campuses blockaded the entrance with burning tyres and other objects.

They are calling for the management to speed up the issue of student accommodation, National Student Financial Aid Scheme  payments and to do away with academic exclusion. The ongoing student protest has resulted in the suspension of academic activities at all TUT campuses since last week Tuesday.

The protest continues despite the announcement by TUT management that an agreement had been reached with student bodies over the weekend.

Students at the Ga-Rankuwa and Pretoria West campuses say they are not part of that agreement.

“Today, we are here and we are saying we are going to shut down until our demands are met,” says Kingsley Baloyi from the EFF’s Student Command.

The Pan Africanist Student Movement of Azania (Pasma) and the Democratic Alliance Students Organization (DASO) are also in support of the shutdown.

“Our demands are simple. I mean the management wants students to vacate the residences for renovation. We are saying this can be done while they’re in there. We’ve been fighting this and suddenly there’s an alternative building, for what?”

Some students say they are frustrated.

“I don’t have an academic record and I cannot move into residence right now because NSFAS did not pay. I’m travelling from home and I have no money. And I’m a child from a no working-class family,” says one of the students.

TUT Spokesperson Willa de Ruyter says they will continue to engage with student representatives to try and resolve the concerns that led to the protest.

“We are still engaging with student leaders and I cannot say we are considering the court measures for now. And it is positive and we are going to commence with academic activities at all campuses tomorrow (Tuesday). And I think it is important for the public to know that we engage with legit student leaders, not structures. Students must go to their SRC’s for feedback and they provide feedback to their constituencies.”

According to the management of the university, academic activities are running smoothly at the Soshanguve, Mbombela and Polokwane campuses.

In the meantime, police and security personnel are maintaining a close watch on the affected campuses.

Limpopo man wanted for killing wife, child and kills himself by...

A cup of pap goes a long way for community members