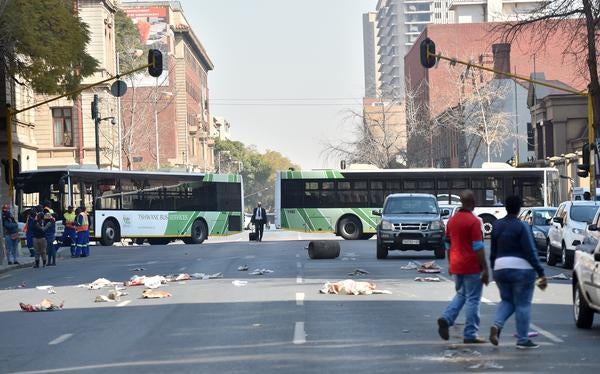 Workers affiliated to Samwu were back on the streets demanding a pay increase of 18%.

Several major routes in the Pretoria CBD were once again blocked off on Tuesday to traffic by striking bus and truck drivers.

Workers affiliated to the (Samwu) were back on the streets demanding a pay increase of 18%.

Tshwane Metro Police Department spokesperson Isaac Mahamba said: “There are several streets that have already been blocked by buses. The streets around Tshwane House, Madiba Street, between Lilian Ngoyi Street and Sisulu Street are already blocked with buses. Es’kia Mphahlele Street between Struben Street, and Johannes Ramokhoase Street, those streets are also blocked for traffic”.

Their protest, which started on Monday, brought traffic to a standstill when moving in and out of the city was severely limited.

The city also claimed the vehicles were taken without permission from depots and those involved would face disciplinary action.

The city and Samwu were due to meet on Tuesday at the bargaining chambers in a bid to bring an end to the strike.

NSFAS staff to go on strike

Each generation must discover its mission