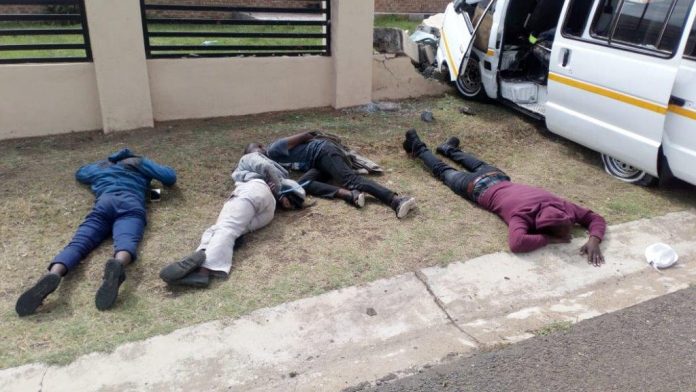 Four men linked to business robberies in Gauteng were arrested in Ezakheni, Ladysmith, after trying to flee from police.

Law-enforcement officers responded to information about suspected criminals travelling in a minibus taxi on Saturday.

“Police instructed the suspects to stop. However, when officers approached the vehicle the suspects opened fire at them,” said spokesperson Brig Jay Naicker. “The suspects attempted to flee and crashed their vehicle into a wall.”

Naicker said the suspects then tried to get away on foot, but were arrested.

They were taken to hospital, where they are under police guard. A firearm and a toy gun were seized.

The men will appear in the Ladysmith magistrate’s court soon, charged with attempted murder, possession of suspected stolen property and illegal possession of a firearm.

Preliminary investigations revealed that their vehicle was allegedly stolen in Diepkloof, Soweto.

Naicker said investigations to determine if they were linked to other crimes were ongoing.

Grieving in the time of COVID-19

Mobile clinic to the rescue-Riverside View