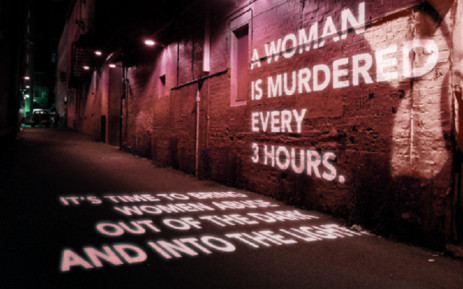 16 Days of Light: It’s time to bring women abuse out of the dark and into the light

According to Casey Rousseau from 1st for Women Insurance. “We live in what our President has called “one of the most unsafe places in the world to be a woman”. A country where a woman is murdered every three hours and where 52 420 sexual offences were reported in just 365 days. The horrific events that occurred this year was the tipping point for South Africa. They also prompted us to re-evaluate our Foundation’s approach to fighting women abuse and launch a new preventative and response programme that takes into account and addresses the root cause of the epidemic.”

During the national 16 Days of Activism for No Violence Against Women and Children campaign, 1st for Women Insurance will shine a light on women abuse by projecting 15 haunting tributes to victims of brutal murders, rapes and femicides on to very dark places – the actual locations of these crimes.

“Women abuse is a dark subject. It happens in the dark. When it’s not reported, it stays in the dark. That’s why we’re committed to bringing it into the light and keeping it there because it is only with constant illumination that the subject will remain in focus – not just for 16 days but for 365 days a year, every year,” says Rousseau.

Since 2005, the 1st for Women Foundation has contributed over R70 million to various organisations that focus on fighting woman abuse.

“Although over 90 000 victims and survivors of abuse have been assisted by the Foundation, women abuse in South Africa is a burgeoning and complex issue that requires a multifaceted approach to address the underlying attitudes, beliefs, practices and systems that condone, justify or excuse gender inequality,” says Rousseau.

“Through our research we found that male superiority and a culture of violence which manifests itself in the form of patriarchy, control, sexual entitlement and unhealthy conflict resolution skills are determining factors towards women abuse. This was confirmed through research conducted in six gender-based violence hotspots in South Africa, where it was found that patriarchy is the biggest driver of women abuse. We also found that a prevention and response approach to addressing women abuse in South Africa is critical.

“We believe that education is a fundamental tool in the fight for gender equality and will be launching a school-based learning programme at 20 registered Early Childhood Development (ECD) Centres and five Primary and High Schools in the Diepsloot community for children aged three to 18. The programme also includes a comprehensive community-based support programme for survivors of abuse (from trauma to prosecution) which is currently being implemented with Lawyers Against Abuse in Diepsloot. Self-defence training and a digital tool will be integrated into the programme at a later stage,” says Rousseau.

Diepsloot was selected as it has some of the highest rates of violence against women ever recorded in South Africa – more than double those reported in national studies. A national roll-out will be considered following a successful pilot in Diepsloot.

1st for Women’s implementation partners for ECD learners include Think Equal, the first global education initiative endorsed by the UN Human Rights Office and the Ntataise Trust, an independent organisation that helps women in disadvantaged, rural communities gain the knowledge and skills needed to establish and sustain effective ECD programmes for children in their care. Through this programme, learners will be equipped with social and emotional intelligence and values-based skills to end discriminatory mindsets and the cycle of violence.

Think Equal has piloted this programme in hundreds of schools across five continents, reaching over 38 000 children so far. The pilot programmes, evaluated by Think Equal’s partners at the Yale Center for Emotional Intelligence, have proved highly impactful and successful across many diverse countries.

The programme includes self-esteem, physical alertness and body consciousness training for girls and the ‘Peace is a Decision Programme’ for boys, which is focused on training and equipping boys with the necessary social courage to challenge cultural norms that condone violence against women and girls, and to intervene when girls and women are being abused.
REPSSI will also provide training for parents, caregivers, teachers and school leaders.

“Through our campaign and our preventative and response programme, we’ll ensure that the epidemic that is women abuse never fades into the darkness,” concludes Rousseau.

For more information about the 1st for Women Foundation and for updates on the campaign, visit: www.for-women.co.za/sixteendays

Witkoppen Clinic:”Why we need your help”?