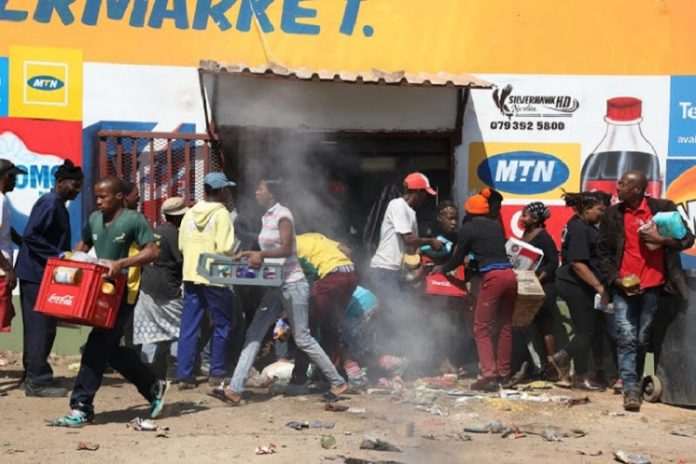 Foreign-owned shops in Soweto were under siege on Wednesday as residents went on a looting spree.

Areas that have been affected so far are said to be Zola, Emdeni, Moletsane, White City, Zondi and Rockville.

The assault on foreigners is reminiscent of a wave of xenophobic attacks that were unleashed in Soweto a year ago. Last year’s attacks on spaza shops left foreign traders counting losses following allegations that they were selling expired products.

Police spokesman Capt Kay Makhubele confirmed that residents from a number of townships had been looting foreign-owned stores since Wednesday evening.

“At the moment it is not clear what started this. We are yet to determine the wide scale of the looting, but we have members on the ground monitoring the situation,” he said.

Makhubele said it could not yet be established whether any injuries had been reported or any arrests made.

Residents in White City claimed the looting was the community’s way of showing its anger at the attack in police officers in Johannesburg’s CBD more than two weeks ago.

Foreign traders forced police to beat a hasty retreat under a rain of stones as they attempted to force their way into buildings believed to be used to store counterfeit goods.

But last week, law-enforcement personnel reclaimed control of the Johannesburg CBD through the “Okae Molao” operation, which saw seven assault rifles, three pistols and millions of rands worth of counterfeit goods being confiscated in the inner city.

Resident Tshepo Lehohla told Sowetan residents felt they were being disrespected by foreigners.

“How can people from out of this country attack our police officers? Police in other countries would not tolerate that. People are angry because of that,” he said. Another resident said the looting was bound to happen.

Moeketsi Tladi said he was not surprised at what was happening in his area.

“People have been upset with what happened. It was only a matter of time,” he said.

Organ donors get dirty for a worthy cause

IT’S NEVER TOO LATE TO QUIT SMOKING BEFORE LUNG SURGERY –...

COURT TO DECIDE ON ESKOM’S DEMAND FOR S.AFRICANS TO PAY MORE...