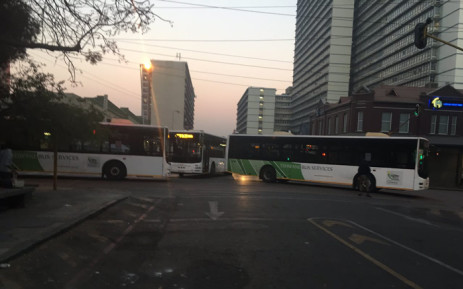 Several roads in the capital were gridlocked this morning with buses blocking the routes, which made main roads inaccessible to vehicles.

The bus drivers who stole vehicles from the City of Tshwane to barricade roads in the CBD could face disciplinary action.

Several roads in the capital were gridlocked this morning with buses blocking the routes, which made main roads inaccessible to vehicles.

The Tshwane Metro Police Department is expected to tow the vehicles after protesters allegedly left with the keys.

“This is tantamount to theft of municipal property, people could now lose their jobs,” said MMC for Roads and Transport Sheila Lynn Senkubuge. “We cannot stop workers from protesting and raising their concerns, you cannot be allowed to put every member of this city at a disadvantage because you want to raise grievances”.

Reports that the former city manager Moeketsi Mosola had received an R7 million golden handshake had angered workers even more.

Samwu’s Lesang Montsho said he was not aware that protesters were using buses to barricade the roads.

“I’ve only learned about the situation today, I’m still driving to work now [and] I will probably be blocked as well,” he said.

The municipal workers marched through the CBD to hand over a memorandum to Tshwane Mayor Steven Mokgalapa’s office. More workers were expected to join the march.

“The situation might get worse and take time for us to reopen roads. The motor vehicles that are being parked here are trucks and we are not sure which area they come from,” said TMPD’s spokesperson Isaac Mahamba.

The protest disrupted a number of programs in the capital. As a result of the march, Monday’s sitting at the inquiry into the Public Investment Corporation was canceled.

Hand to Hand Foundation on a mission to keep local neighbourhoods...

Initiative encourages South Africans to get to know their HIV status

EXPLAINER: How your votes translate into seats??