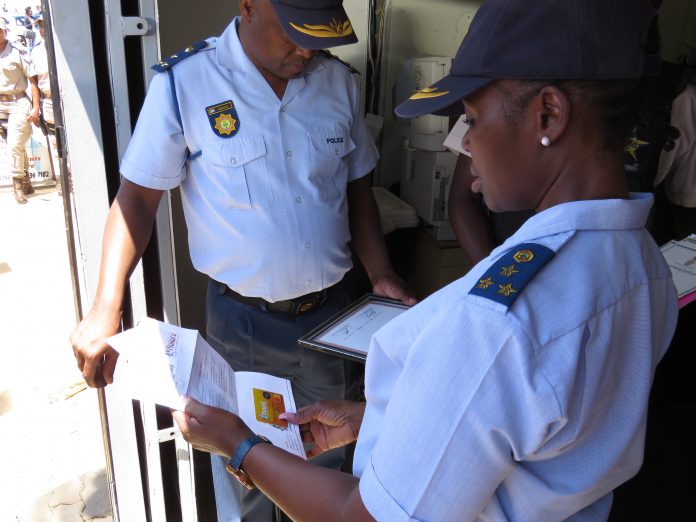 The campaign was aimed at mobilizing the community of Diepsloot to be activists in the fight against crime and also to foster community-police relations. A battalion of police officers led the crowd moving from Diepsloot Mall, and going through some of the identified crime hotspots such as the Extension 7 Bridge. Most shops which were assumed to be selling drugs and producing fake documents were raided.

“We have managed to arrest at least four people who were involved in the production of fraudulent drivers’ licenses, IDs and certificates from higher learning. Most of the people who buy fraudulent documents will also end up being caught.” U-MEC wanezela ukuthi isisusa somkhankaso ukulwa nobugebengu obukhona eDiepsloot.

“If you look at crime statistics, the majority of the people who are either victims or perpetrators of crime are young people. Young people always get targeted by the criminals because of the gadgets they are using, for example, cell phones and computers,” she said.

It is not only the community that has benefited,” MEC said, “because I am also motivated by positive things happening in Diepsloot, and I have also benefited as a leader. The Drug Must Fall team has identified about 10 young people who are addicted to Nyaope. We will engage with those young people and take them to the rehabilitation process.”

The programme culminated with the sports against crime games at the local sports grounds. The MEC said sports can be used as a crucial tool to fight against crime.

“Sports games take a lot of energy from the young people,” she told Township News. “But young people also get united through sports, moving away from the drugs. Through sports, children take their negative energy away and use it positively on the pitch.” Youth Crime Prevention Desk chairperson Thabo Ndzimande told this reporter that crime is a very serious issue in Diepsloot, and it is mainly committed by young people. “We are working hand in glove with the corporate community to lesson drug abuse and crime in Diepsloot, he said

Medical interns to join the workforce.

MBALULA OUTRAGED AS DRUNK DRIVING MAY BE BEHIND JOZINI CRASH