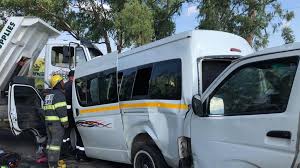 More than 30 people have been injured – some critical – in a collision involving two minibus taxis and a truck on the R114 close to the Heron Bridge in the Lanseria area early this morning.

According to Emer-G-Med spokesperson Jurgen Kotze, one of the taxis could not brake in time and collided with the truck.

A second taxi then rammed into the first.

Kotze told News24 that more than 30 patients were being treated on the scene for injuries ranging from minor to critical.

Other emergency services were also on the scene.

JMPD spokesperson Chief Superintendent Wayne Minnaar said he would provide more information once he had been briefed about the incident.

Become an ’emotional paramedic’ and provide help to people in distress

System looks better today, no load-shedding anticipated for the rest of...

Pick n Pay in Pan Africa Mall is an epitome of...