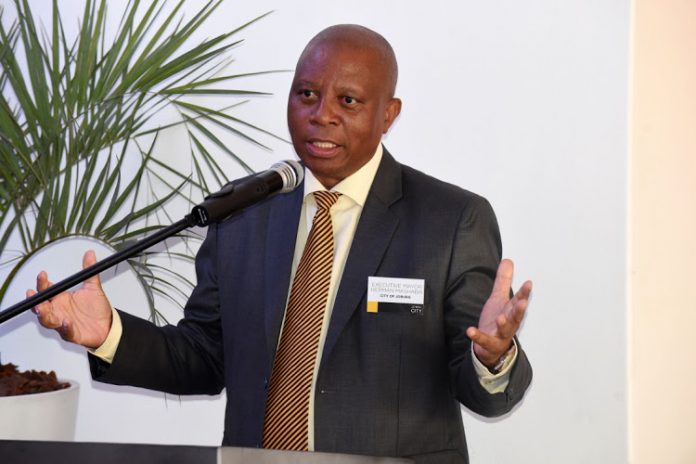 “I’m happy that even though I’m leaving, initiatives like the inner city rejuvenation programme will continue beyond my presence and improve the lives of residents across the City of Johannesburg.”

That’s how the outgoing Executive Mayor of the City of Johannesburg, Councillor Herman Mashaba, kicked off proceeding at an inner city partnership engagement hosted by the Forum of Integrated Risk Mitigation in association with the Johannesburg Inner City Partnership (JICP) at Anglo American.

He said under his administration, direct investment into the City of Johannesburg had increased significantly. “In partnership with business, multiple billion rands have been invested in the inner city rejuvenation.”

Mashaba also thanked business for its partnership and continued support in rebuilding the inner city.

Chairperson of the Johannesburg Inner City Partnership Ishmael Mkhabela said through collaboration between the public and private sector, a vision of a functional inner city can be achieved.

He said crime, grime, homelessness, substance abuse, unemployment, poverty and limited by-law enforcement remained a challenge for the City. However, through partnerships between the government, public sector and civil society, these challenges could be addressed.

“As a partnership, we are determined to make the city safe and welcoming to business, visitors, corporates, students, and academics. We want to be the centre of intellectual capital,” said Mkhabela.

The purpose of the engagement was to review the outcomes of the forum over the past year, engage with strategic partners and identify prospects for the year 2020 and beyond.

Issued by the City of Johannesburg. For all media queries, send an email to mediaqueries@joburg.org.za.

#SANDTONSHUTDOWN: BUSINESS ACCUSED OF BEING ‘DISTURBINGLY SILENT’ ON GBV

HEART DISEASE AND STROKE RATES COULD SPIKE DUE TO “STRESSED” ECONOMY

Herman Mashaba in Zandspruit to examine a housing project