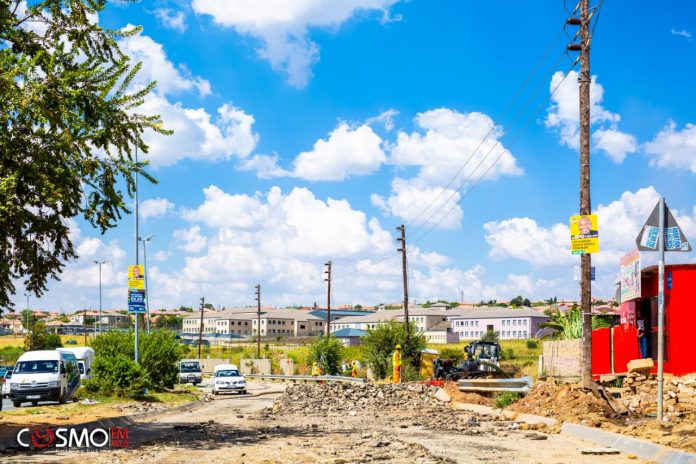 The DA-led coalition government has set aside a significant budget to upgrade the sewer line and improve road conditions in and around Cosmo City.  DA PR Councillor Belinda Echeozonjoku said that as a pro-poor government, they firmly believe in the dignity of all residents and that adequate infrastructure forms a foundation for developing the open society. ‘’Cosmo City is one area that has been waiting for basic maintenance for years especially along South Africa Drive with sewage and running water on the road. Now that the project has begun, traffic is a problem during pick hours from 15h00pm in the afternoon and from 06h00 am in the morning, JMPD has been assisting on South Africa Drive and Angola Street with traffic, ‘’Belinda alluded. Councillor Belinda has been doing an informal oversight visit to Cosmo City and identified that Joburg Road Agency (JRA) have filled the potholes on South Africa Road with rubble as a temporary measure. She further stated she is grateful for hardworking officials, DIPHETOGO of the DA-led administration and support of Cosmo City residents. ‘’Joburg Water is embarking on a sewer pipe upgrade and rehabilitation in Cosmo City. The contractor is already established on the site and the Joburg Water teams are constantly monitoring progress by ensuring that a jet truck flushes the line daily to alleviate pressure.’’ The contractor is expected to complete the upgrade by October 2019 at a cost of R10 million.  Residents of   Cosmo City are urged to join Joburg Water in taking care of the infrastructure by playing their part in ensuring that they do not flush any foreign objects into the system. Belinda added that those who are not familiar with the road closure would be guided by the signs near the Construction site. One resident who didn’t want to be named says that the closed road is affecting them due to excessive traffic and it is better now that they are fixing the pipe.

How to fight COVID-19 with facts (Sepedi translation)