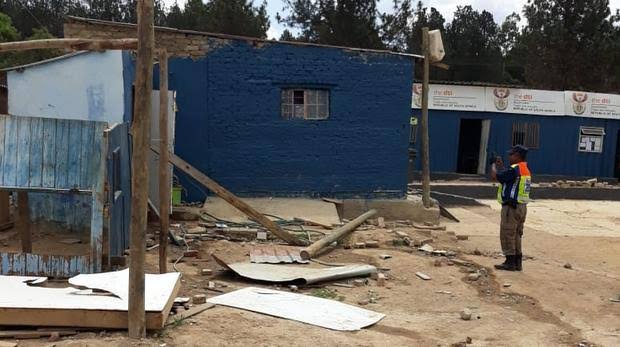 The Gauteng Department has warned parents about taking their children to illegal schools after one was discovered by accident in Cosmo City.

The Johannesburg Metro Police Department were conducting an operation in the area, looking for illegal panel beating and mechanical workshops when they came across the school.

The school, Perfect Space Academy, was operating in what looked like an old building that had been given a lick of  bright blue paint to revamp it.

According to JMPD’s Wayne Minaaar, there was only one teacher teaching all the pupils.

In a video taken by the officers, children’s voices can be heard coming from a shipping container which is used as a classroom with the Department of Trade and Industry banners.

A man is seen being interviewed by police officials stating that he is 20-years-old and intermediate teacher.

It is alleged that learners are paying about R500 a month and the teacher that was interviewed by the police said he has been working at the school since February but has not been paid.

According to JMPD spokesperson Chief Superintendent Wayne Minaaar, the school has 35 learners and four teachers, two of whom are females aged between 22 and 23 are from Zimbabwe.

Minnaar said the other two teachers are males aged 22 and come from Zimbabwe and Botswana respectively.

He added that learners in Grades one, two and three are taught from the same class, while those in Grades four, five and Six are also allocated the other class and Grades eight and nine learners are learning from a tent extension of the building.

Minnaar further added that the owner of the school, could not be found as he was not at the premises during the operation.

According to a tweet from The City of Joburg’s wards 97 Councillor, Leah Knott,  the school is said to be allegedly subsidised by the DTI and its staff is not qualified.

The Gauteng Department of Education spokesperson Steve Mabona said the department will dispatch officials to the school to serve a letter of intention to cease their operation.

“According to our records, Perfect Space Academy in Cosmo City is not registered with the department and is therefore operating illegally,” Mabona said.

“Schools that are found to be operating without registration are instructed to cease operation forthwith and failure to comply will result in criminal charges being preferred against them with the SAPS,” he added.

He further added that prior to operating, all schools must be registered with the department and must have a zoning certificate of consent use issued by the Municipality.

“The department’s policy on illegal schools is guided by the South African Schools Act (SASA) section 45 and 46 respectively. Section 45 states that everyone has a right to open an Independent school at his/ her own cost.

Whereas on the other hand, section 46 states that anyone operating a school that is not registered with the Provincial Department, is guilty of an offence and upon conviction, is liable for a prison sentence of not less than three (3) months,” he said.

Mabona added that parents are advised to take note of the school’s name, registration number, address of operation, board facilities, effective date of start and grades offered before they could register their children at private schools.

“If parents are suspicious of a school, which cannot present a registration certificate, or suspect the school is operating illegally, they should contact the Gauteng Department of Education (GDE) for verification or confirmation,” Mabona said.

The Star contacted the DTI to find out what their connection to the school was but there was no response.