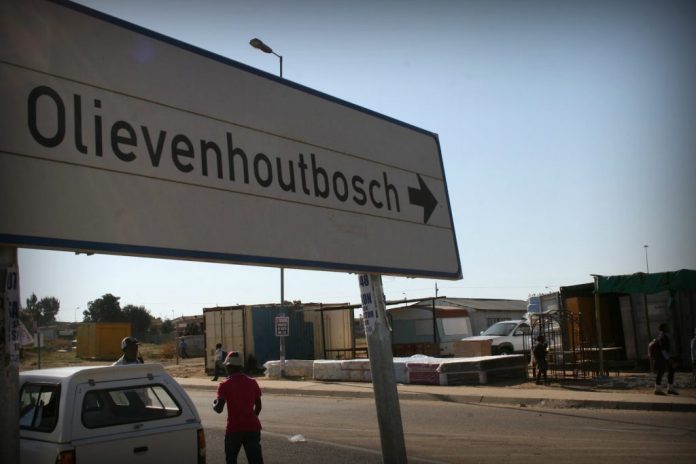 Foreigners are ruining the future for pupils by building illegal and unregistered private schools in the overcrowded Olievenhoutbosch township.

These remarks were made by angry and frustrated residents who shutdown schools and called on parents to take their their children out of all the suspicious schools.

The community was led by the local ANC, SACP and the South African Civil Organisation as they walked from one school to another.

They said the demand for school space in Olievenhoutbosch has created an opportunity for criminals to operate unregistered schools and charge parents monthly schooling fees.

They said it was not possible that the Department of Education would accredited the so called English medium private schools who operate in RDP houses and backrooms.

The group went to Emmanuel English Private School offering grade 1 to 7 classes in backrooms and also uses the RDP house in the yard as an office.

They stopped academic proceedings and asked the teachers to call parents to fetch their children.

The school deputy principal Peter Mokwakwa said the school was in the process of registering with the department of education and has made an application for land from the City of Tshwane.

The community rubbished his statements, saying in South Africa the law does not allow people to start running schools while they are still in the process of registering.

They perused the school’s documents and said they only registered as a non-profit organisation, like any person can do on the internet.

Chairperson of the local ANC Youth League Tebogo Koloane said: “You are playing with the future of these children with what you’re doing here.

“What is going to happen when these kids finish grade 7 because real public and private schools will not recognise their qualification to admit them to their high schools?”

Most of the pupils going to these allegedly illegal schools are of foreign descent.

They went to local primary schools like Philane, Walter Sisulu and Bathabile to demand stats on pupils in classes.

They said they intend on removing foreign pupils who used illegal documentation and replace them with South African pupils in the illegal schools.

Beauty Matlhhare and Khomotso Khalushi of the ANC said they don’t want to know about capacity and limits by the department of education.

“The Department of Education has to come here and help us solve this problem and watch us do this.

“We are not going to watch criminals ruin our children’s future. We don’t mind if the department wants to accommodate foreign national pupils, we are just saying we will not watch our children be without schools because an illegal child took the last space.

The department must bring mobile classrooms if needs be,” said Khalushi.

Earlier this month, the community had a big protest that saw them burn tyres and block roads over this issue.

They said they had caught a foreign national man who was manufacturing illegal and fake documents used by foreign pupils to be admitted to local schools.

Their disruptive demonstration was fueled by seeing the suspect back in the streets walking freely.

This led to them accusing the local police of failing them.

However, the police said all the accusations they made needed to be verified and investigated because SAPS management could say there was wrongdoing by the police.